So, I know I generally just write blog posts to complain about crap or to tell you about some awesome new product or service that I've recently started using, but today, I wanted to tell you about a project that has been keeping me busy for a couple of months - My workbench.

Now, sure, I could have gone out and purchased a workbench from the local hardware store or used a prefabricated counter top and bolted it to the wall, but where is the fun in that?!

For this project, I started by researching some workbench designs and talking to friends and family about different options. I wanted something substantial. Something tall. Something that wasn't too deep or shallow. something that would give me storage, but not look like an eyesore. 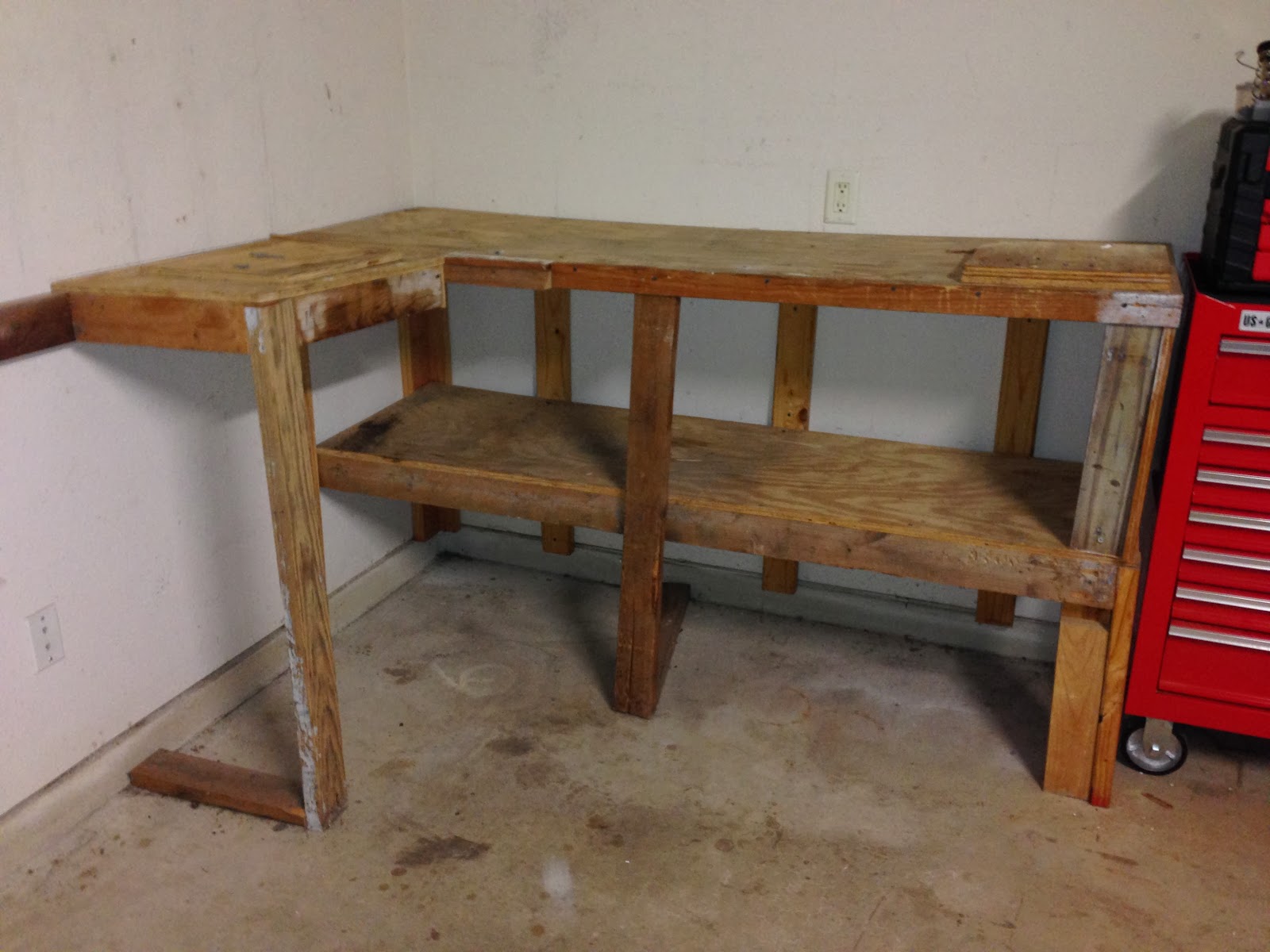 Mostly, I wanted to rip out the old workbench (made of scrap parts by the previous owners) and build one that meets my needs and expectations.
This gave me the excuse to do several things: Once I had an idea of what I wanted to build, I quickly realized that I HATE drawing up designs using paper and pencil. I HATE it.


It's difficult to do and when you make a mistake you have to start over or do lots of erasing. it's terrible.
That's where SketchUp Make came in handy! This software is awesome. It took a little bit of trial and error, but it's really easy to learn and use. Their tutorial videos are fantastic! [No, I'm not sponsored by these guys. they make a great product and deserve to be recognized for it.]

SketchUp gave me the ability to tweak the design and try different things in a 3D space ultimately designing a MUCH better product. I can't stress how much I love this software. The rendering above is the workbench without the 3/8" plywood top and shelves.

UPDATE (2/4/2015): I decided it would be nice to provide the SketchUp design files so that you can view the design and pick it apart at home. I'll try to keep this link active.

I wanted the workbench's primary aesthetic to be the 2x4 frame and the 4x4 legs. I also wanted to recess the plywood top and shelving so that the edges would be covered by the 2x4 framing. I achieved this by inlaying bracing the held the top and shelves. 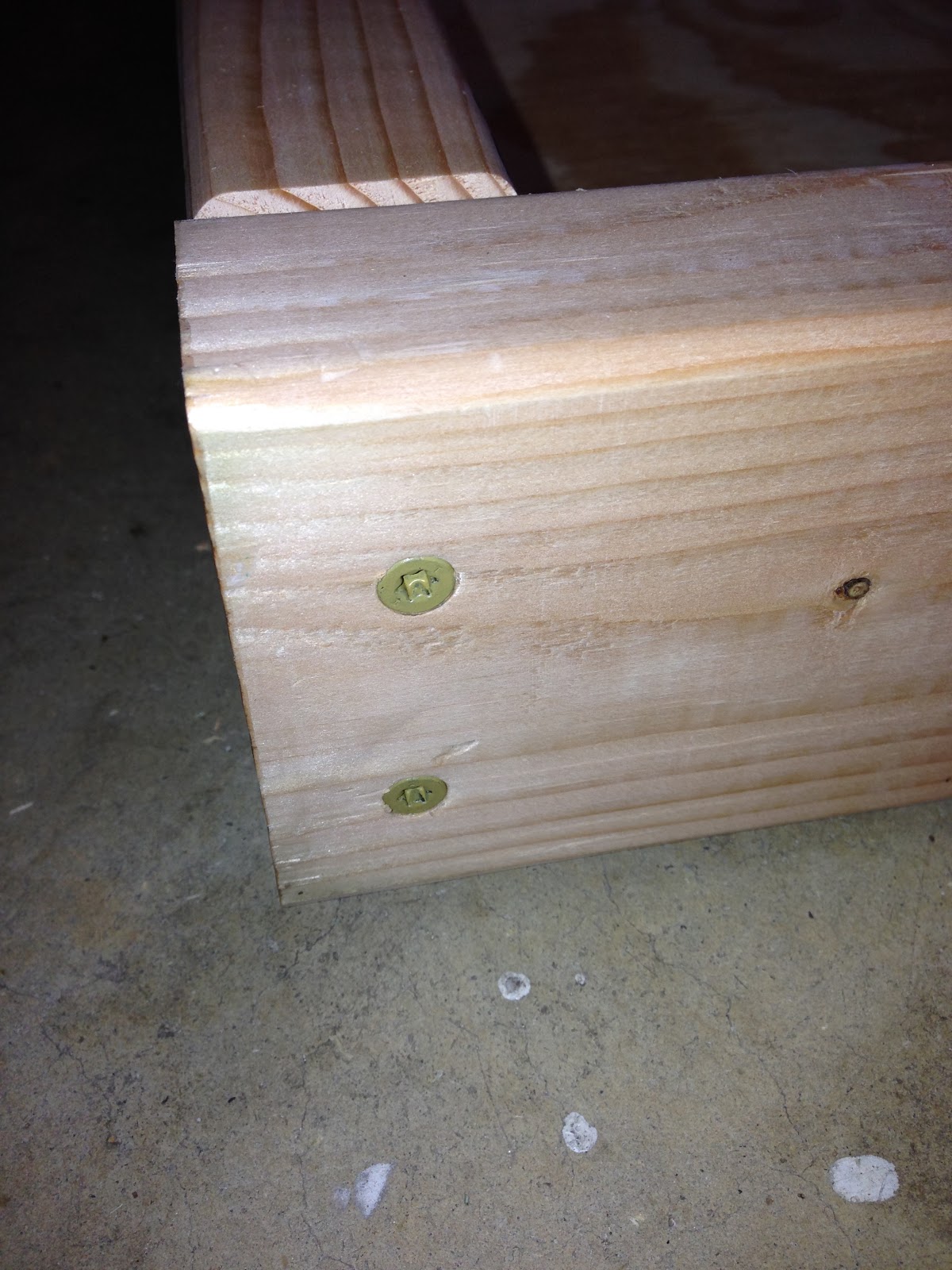 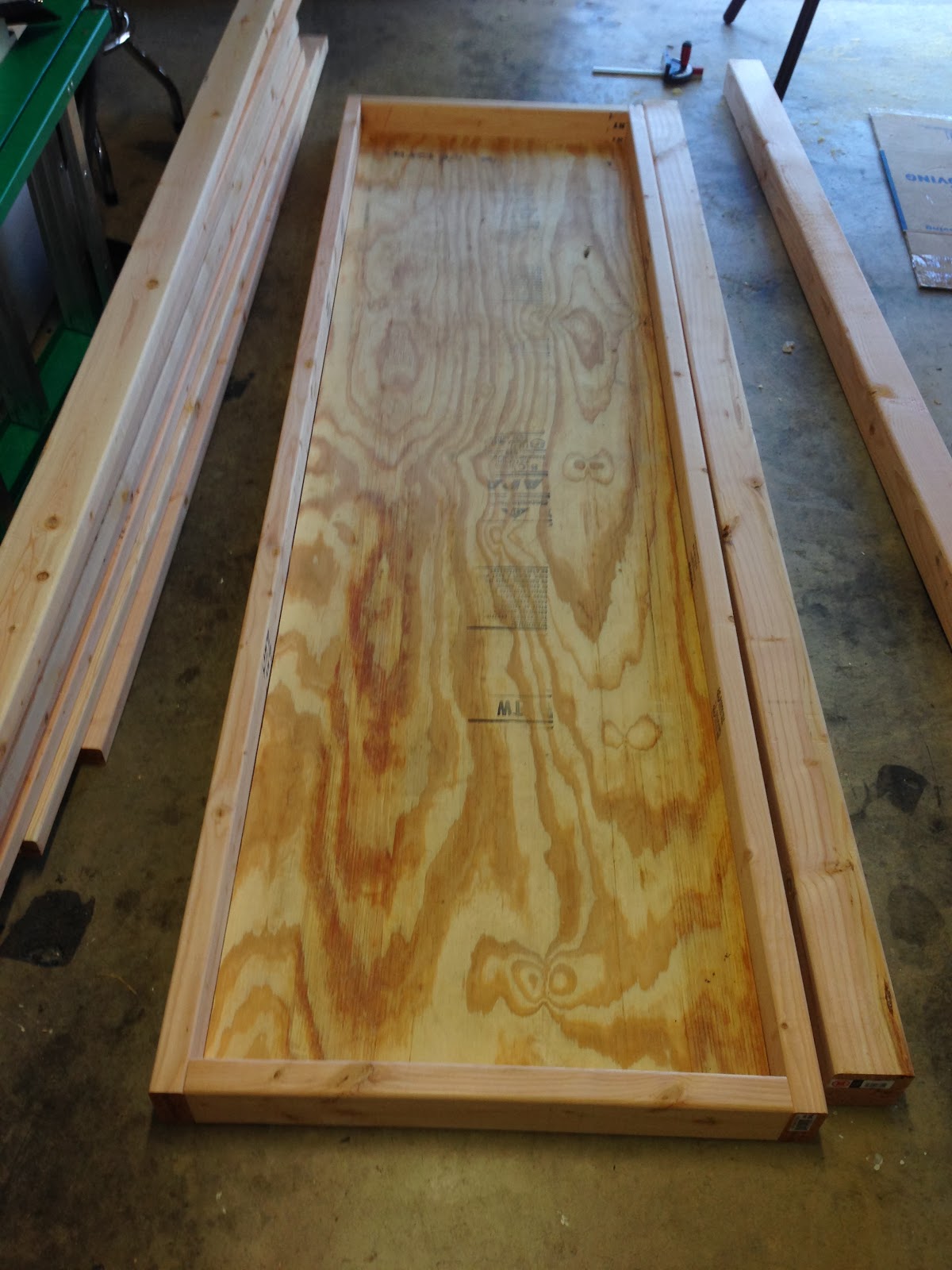 We started with the 2x4 frame for the top of the bench and worked our way down. The photo on the right shows the plywood top laying inside the frame (placed there to verify the measurements for the legs and bracing.

The 4x4 legs were notched to allow the top frame to sit down into the 4x4 to support the frame and the top. 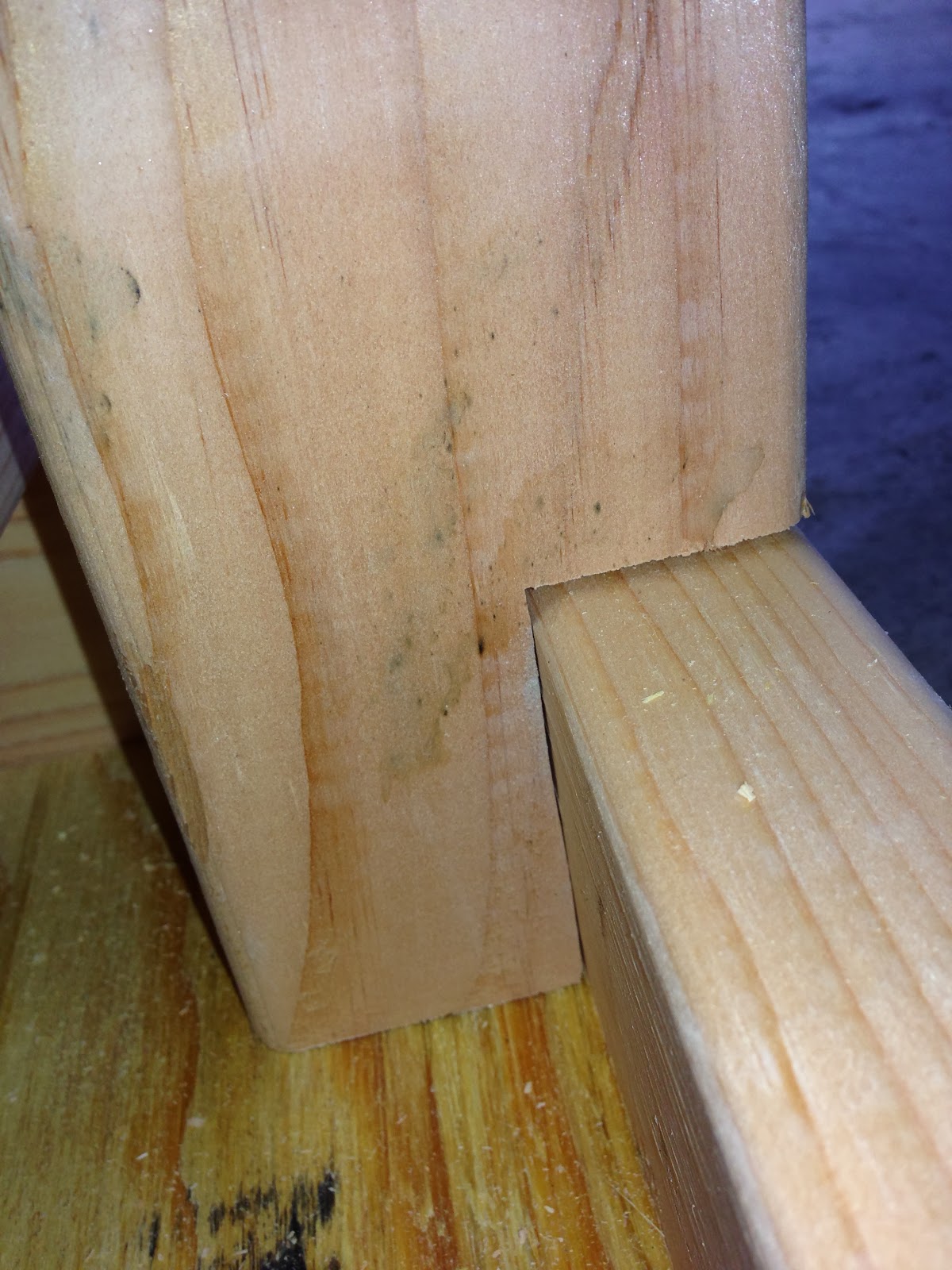 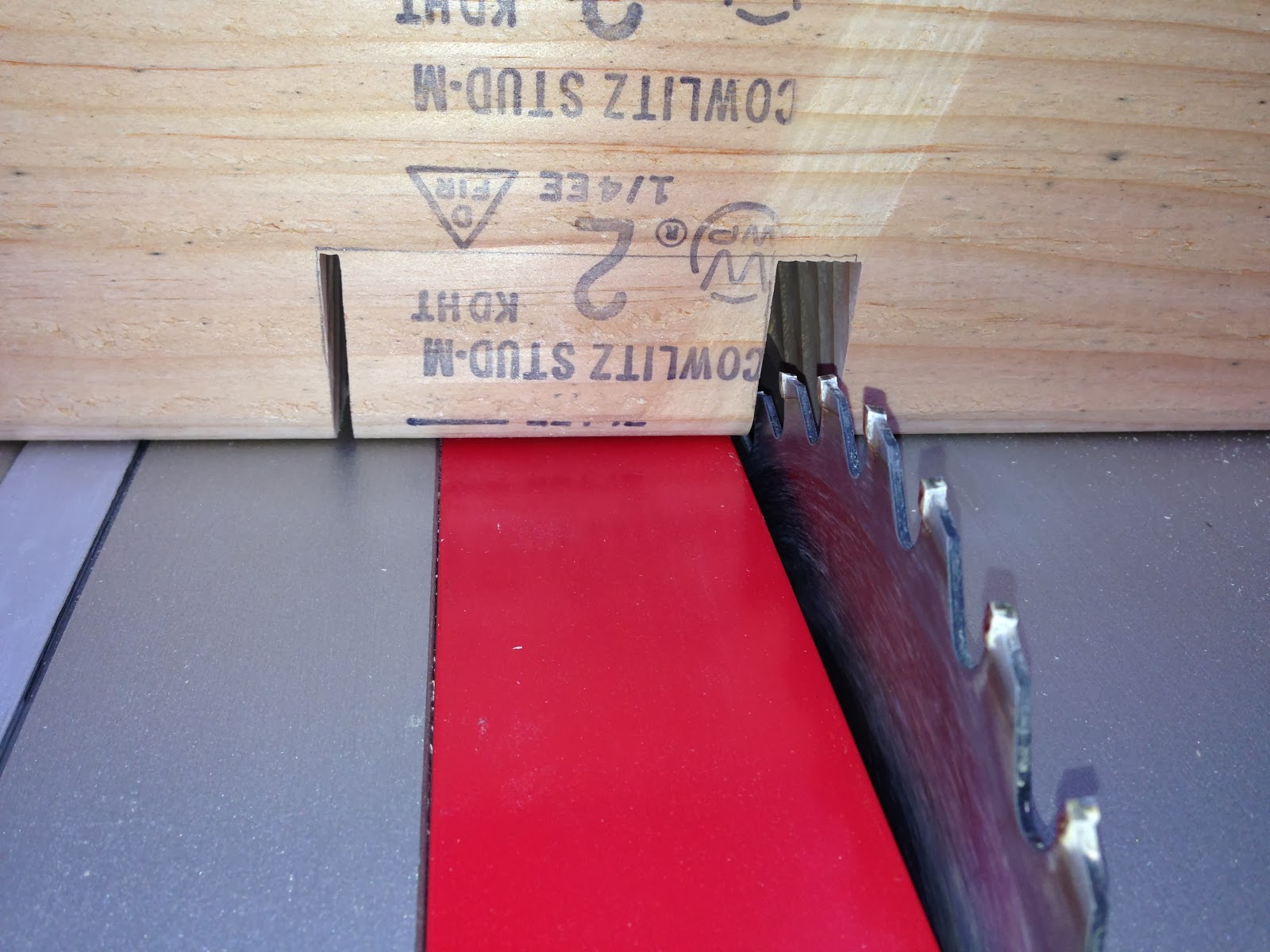 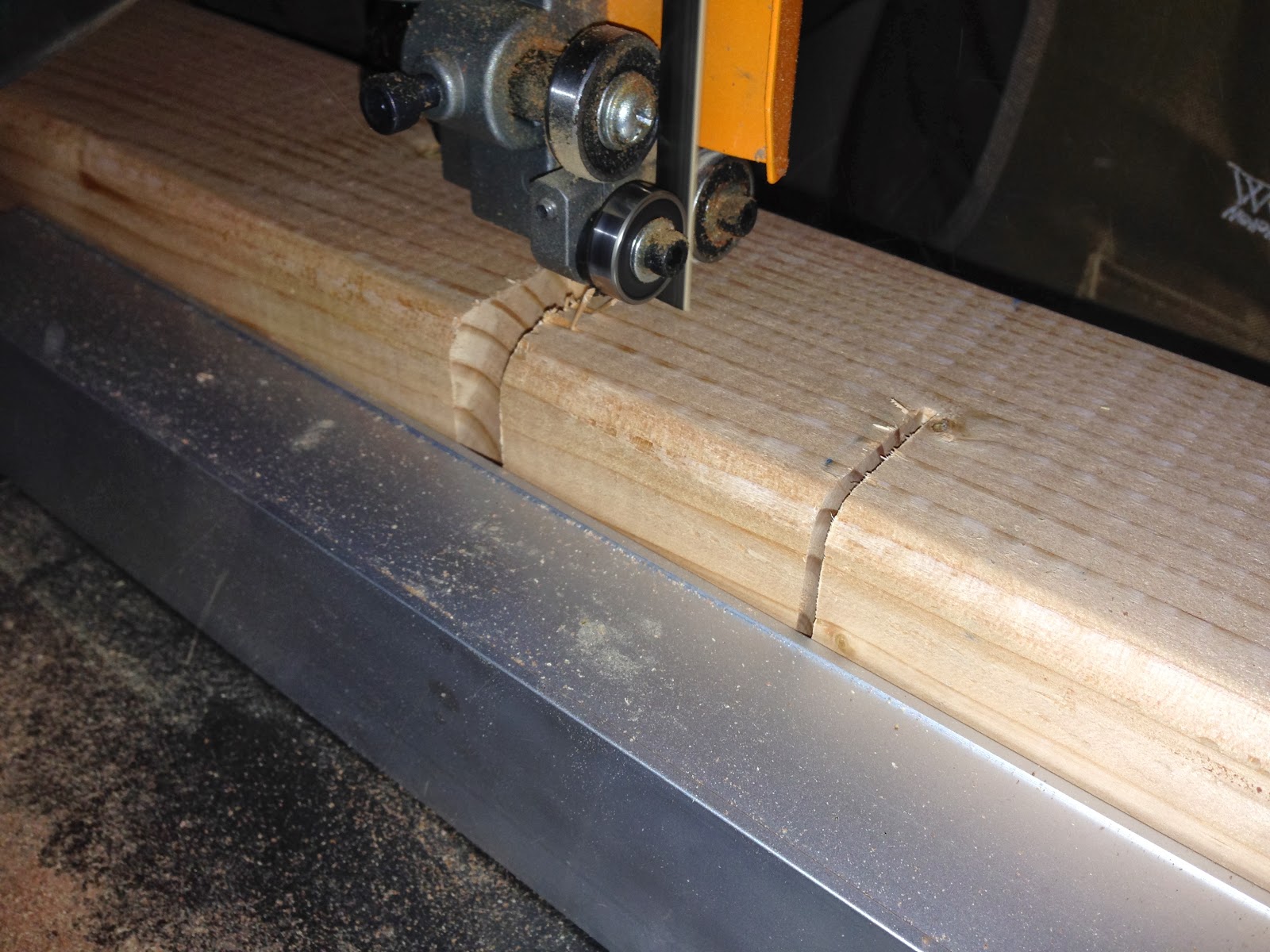 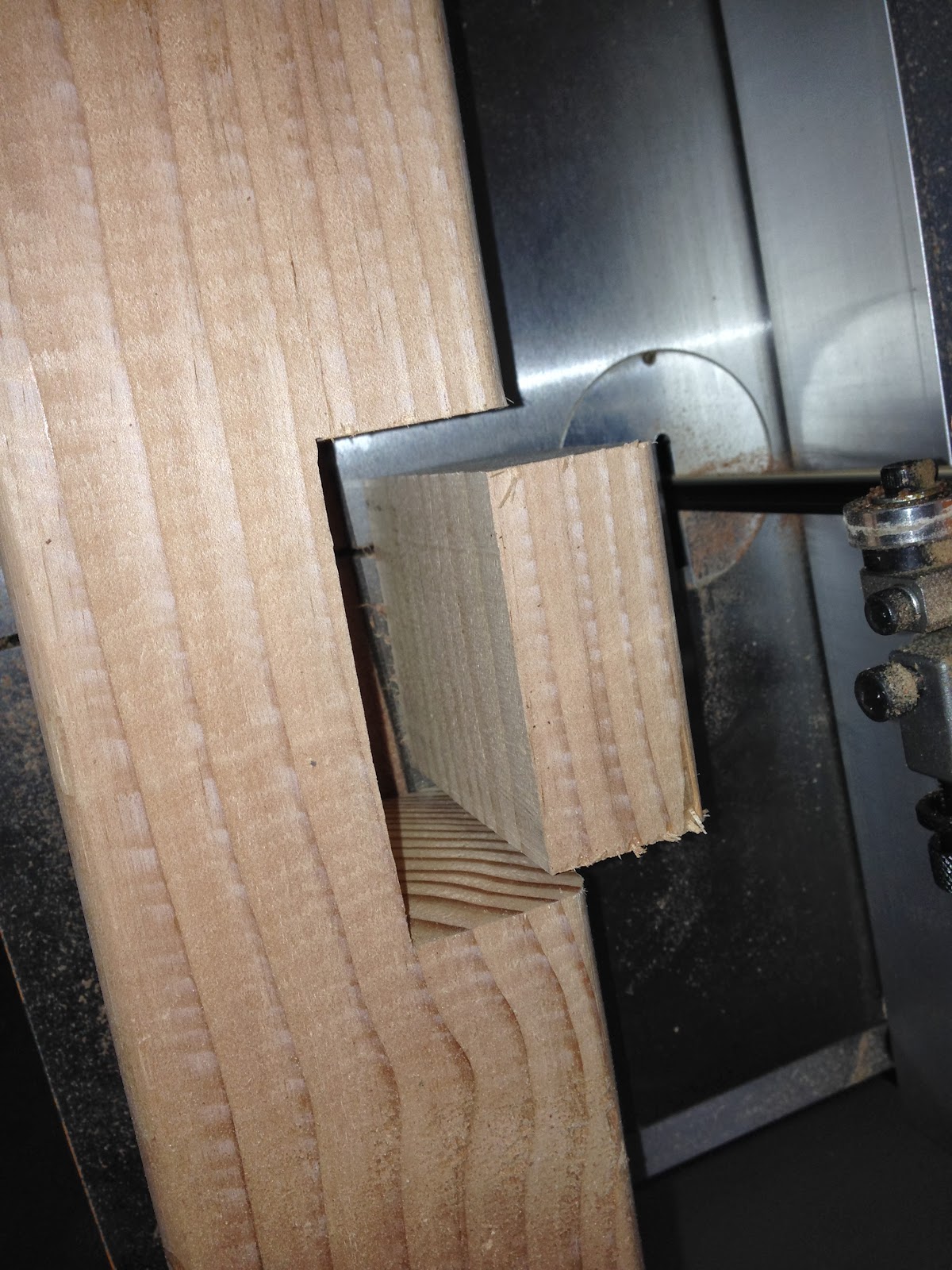 We waited until this point int he build to actually chop the legs to lenght. We decided it would be best to get our notching done first just in case we messed something up. 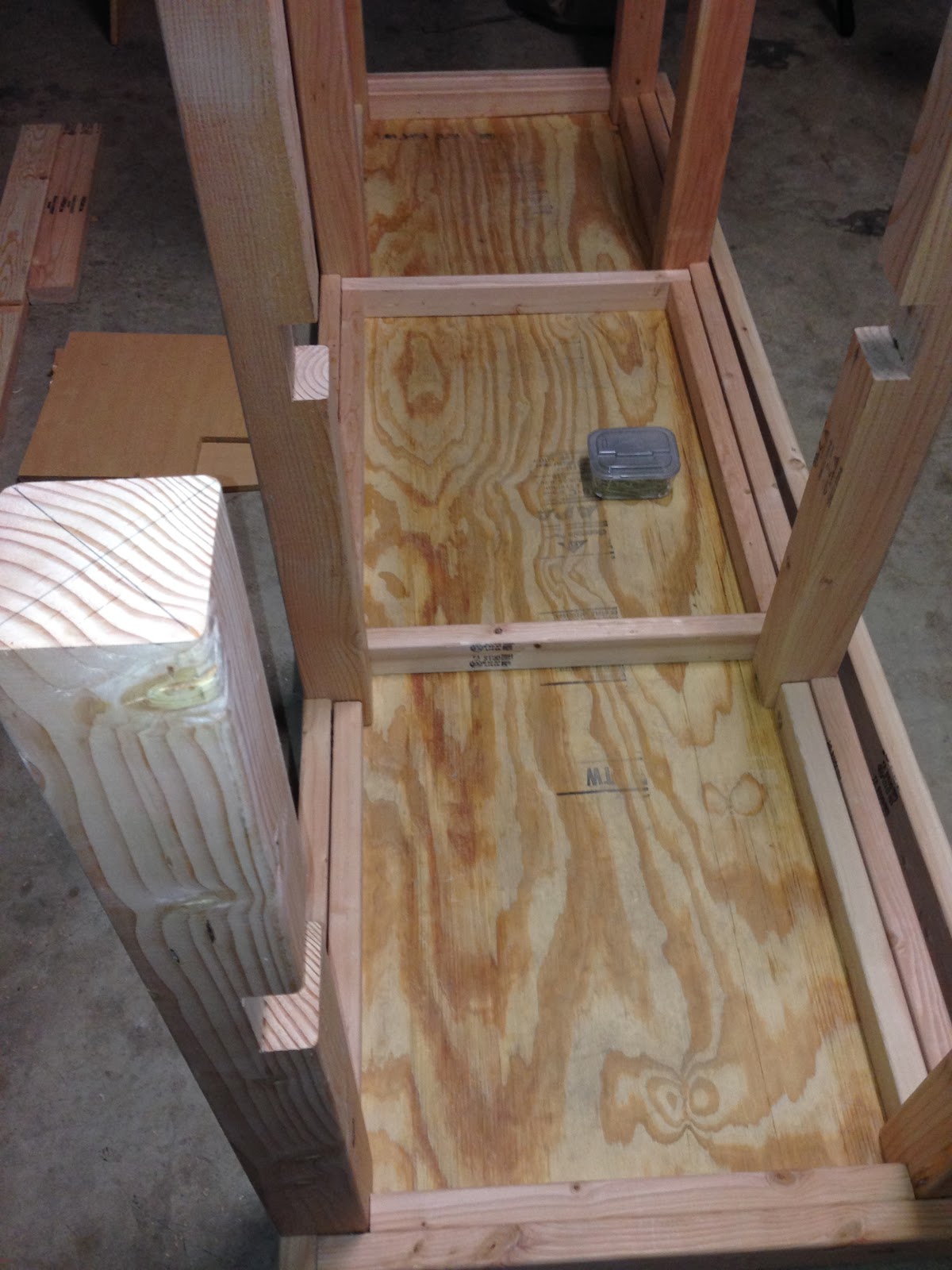 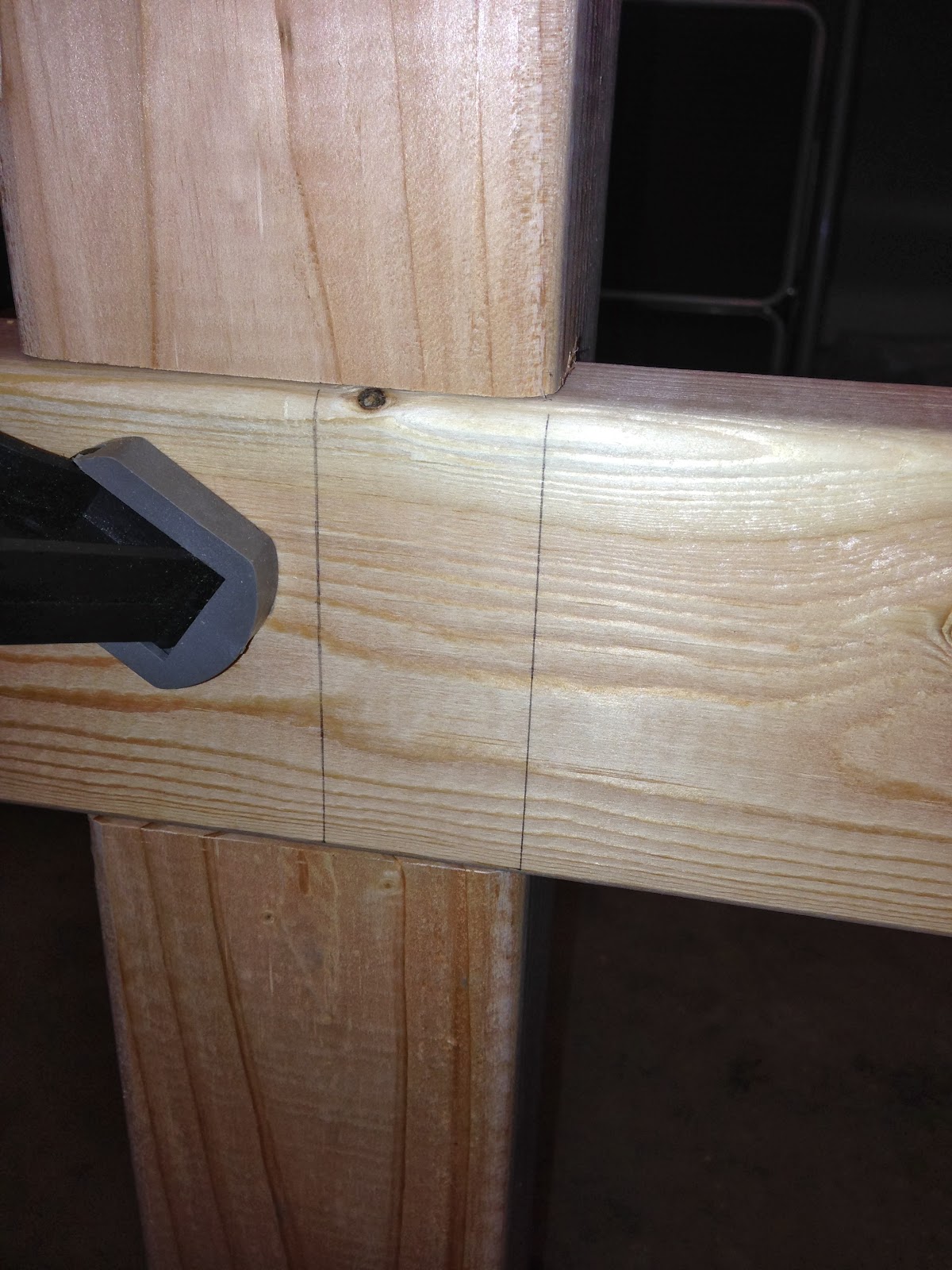 The original plans did not have this, but we decided that it would be nice to notch the long 2x4 on the back to better support the bracing that runs from front to back on the shelving rather than screw it together from behind the 4x4 leg.

To do that, we had to fit the long 4x4 into place and then mark the notch points. Since this was a shallow cut, it was easiest to do the entire cut on the table saw. We were only making 2 notches after all. 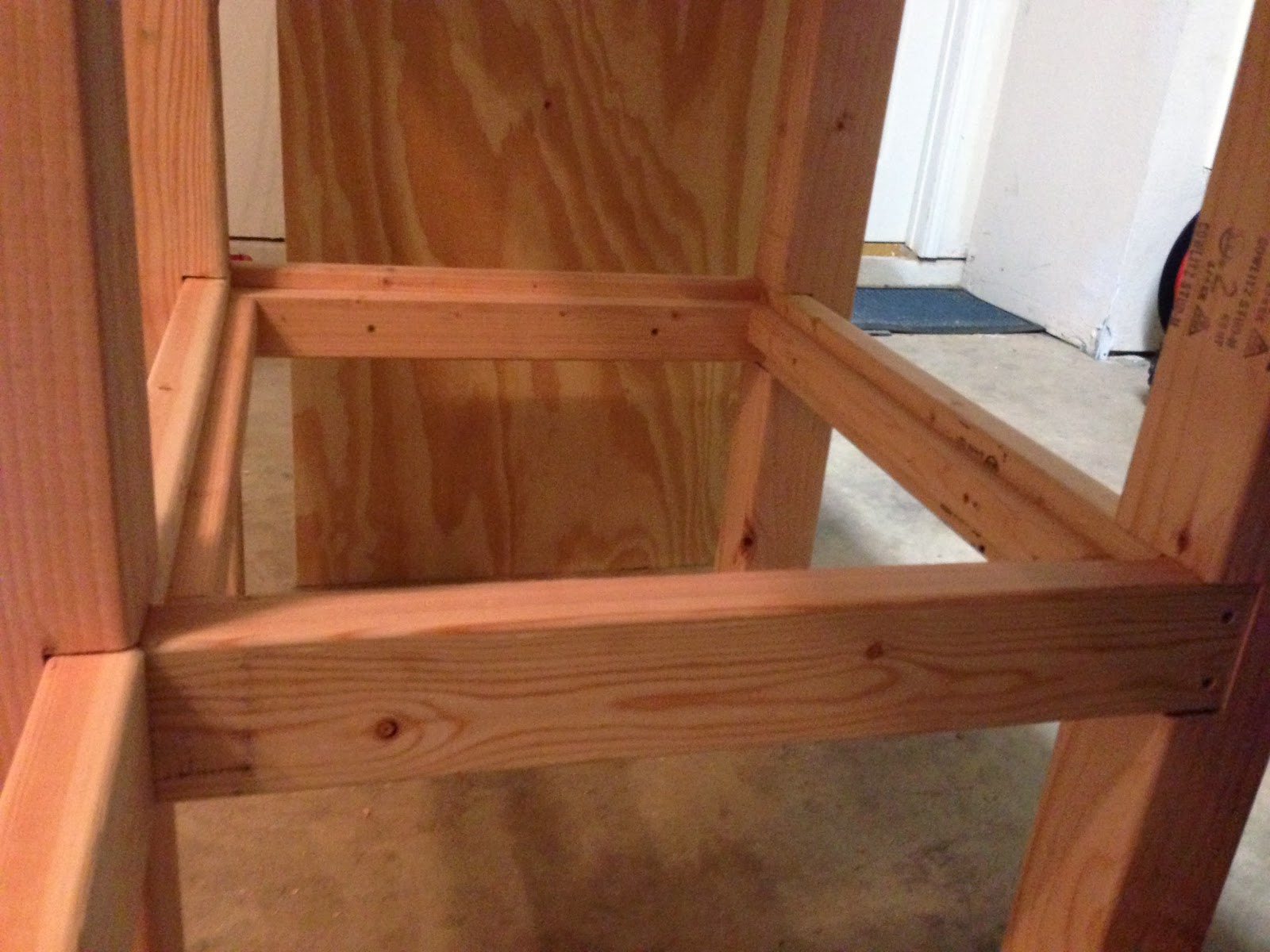 At this point in the build we did a lot of measuring, cutting, and assembling. I did not, however, do a lot of photographing. As a result, there isn't much documentation of the lower bracing (that holds the shelving and makes the bench nice and sturdy.)

The bracing sure looked nice once it was assembled, though. The front and back bits of inner bracing are the ripped section of 2x4. I wasn't too concerned about the lower shelving needing a lot of lip to sit on all the way around, so I used some of the wood that was left over from ripping the upper 2x4s.


Something I didn't consider in the design phase: Garage floors are NOT level. They are uneven. They require leveling feet.

Have you ever priced heavy duty leveling feet? Those sonsofbitches ain't cheep.

So, I did some research and came across Dan's Shop. Great work, Dan!

One thing I found out, however, is that coupling nuts can be a little steep for what they are....


For less than the $32 I would have spent at Lowe's for the coupling nuts, I rummaged through eBay and found a box of 100. I figured the math made sense and I also purchased 35 carriage bolts for $10 while I was there. It saved me a trip and I've got plenty to spare.

All that was left was to cut the 3/8" plywood and drop it into place for the bottom shelving. 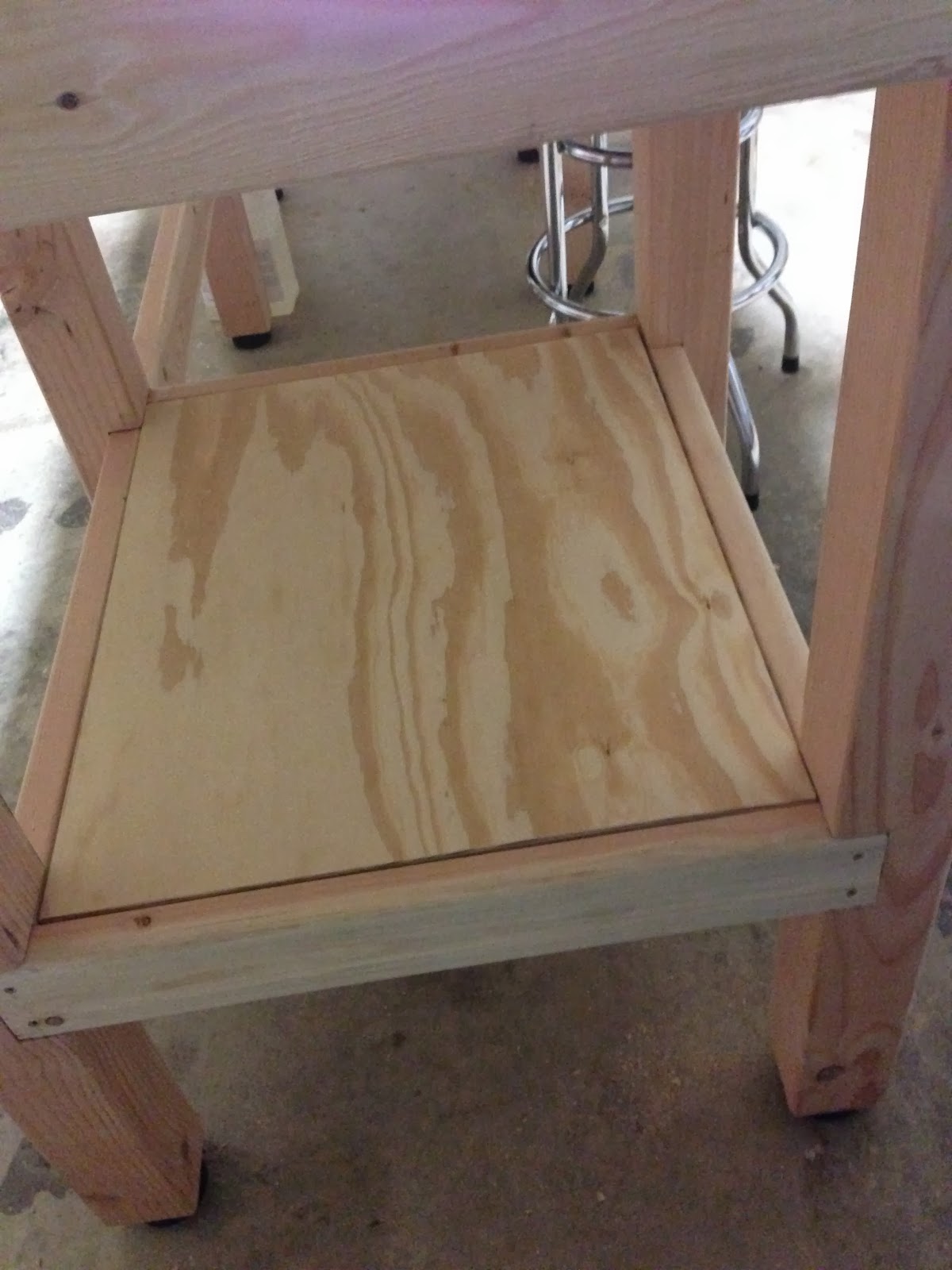 It still needs a bit of sanding and I'm not sure how and if I'm going to coat it. Overall, I'm quite pleased with the build and am excited to start my next project - now with a functional workbench at my disposal!

For those who want to know, I spent about $200 on materials for this project not counting tools.
Posted by Mike Schwirian at 9:43 PM

Ooo! It looks awesome!! Here's wishing you and your bench decades of productivity!